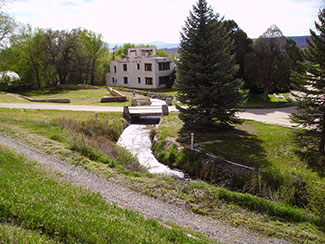 Acequias are the oldest water management institutions in the United States of European origin. These irrigation ditches, brought by the Spanish colonies, once supplied water to a large portion of the Southwestern United States. Today, around 800 acequias continue to feed the fields of Northern New Mexico! Each acequia has a mayordomo (ditch boss) and a commission, which oversee the delivery of water, settle disputes, and maintain the ditch. These ditches also help to restore aquifers and riparian areas. One of the few commons still existing in the United States today, acequias are an essential part of identity and survival. The phrase, "Water is the lifeblood of the community", is often echoed throughout the high desert villages and towns in Northern New Mexico. Acequias are, in short, the living history of New Mexican heritage and agriculture.

The Sustainable Agriculture Science Center at Alcalde is involved in several projects pertaining to acequias. One ongoing project characterizes the interactions between surface water and groundwater among acequias, irrigated fields, the source river, and the aquifer while asking, "To what extent do acequias and acequia-irrigated fields provide the benefits of aquifer recharge and delayed groundwater return flow to the river?" SASC is also part of a study that analyzes and reports on how acequia water systems link culture and nature as well as provide resilience in the face of climate and land-use change. This multi-year, interdisciplinary, and inter-institutional project is based upon research that bridges the fields of social science and natural science through System Dynamics. The intention of the project is to provide guidance for policy makers, academics, and the people who use the ditch.

In 2010 under the leadership of Principal Investigator Sam Fernald, the research project, Acequia Water Systems Linking Culture and Nature: Integrated Analysis of Community Resilience to Climate and Land Use Changes, was awarded a $1.4 million grant by the National Science Foundation (NSF). From an ambitious list of project deliverables, this publication, Acequias of the Southwestern United States: Elements of Resilience in a Coupled Natural and Human System, was conceived in order to document the researchers' various findings and to bridge the chasm between the academic analysis of a subject(s) and its translation for the public. In the spirit of the commons, it strives to provide useful information and access for all persons.

The College of Agricultural, Consumer and Environmental Sciences is aggressively involved in finding solutions to current problems in New Mexico. The Water Task Force is an interdisciplinary team of researchers, scientists, and other experts that conduct commissioned studies and other work. This link leads to the Water Task Force research reports. 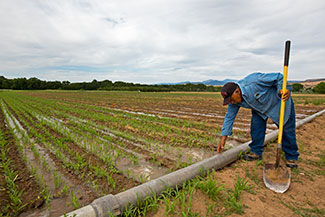 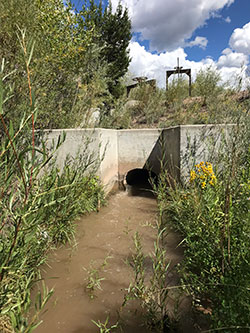